I enclose a review by Julie Chamberlain from the Coventry Telegraph.

This review covers very well the launch event that we held for our opening of the Ragley Open Art Exhibition on 17th August 2014. Julie Chaimberlain – Coventry Telegraph review.

The Exhibition continues until Sunday 7th September and is really worth a visit. 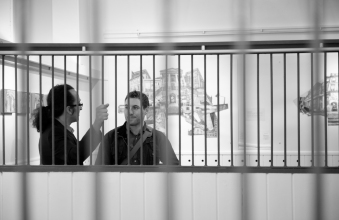 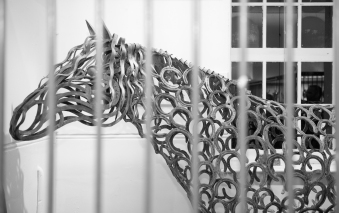 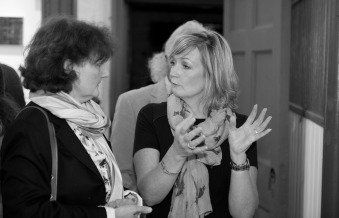 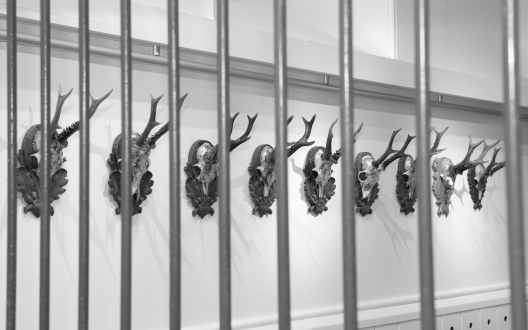 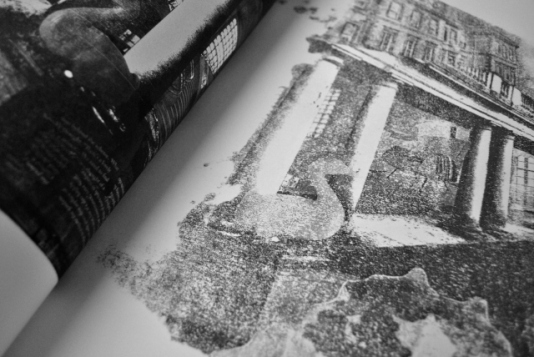 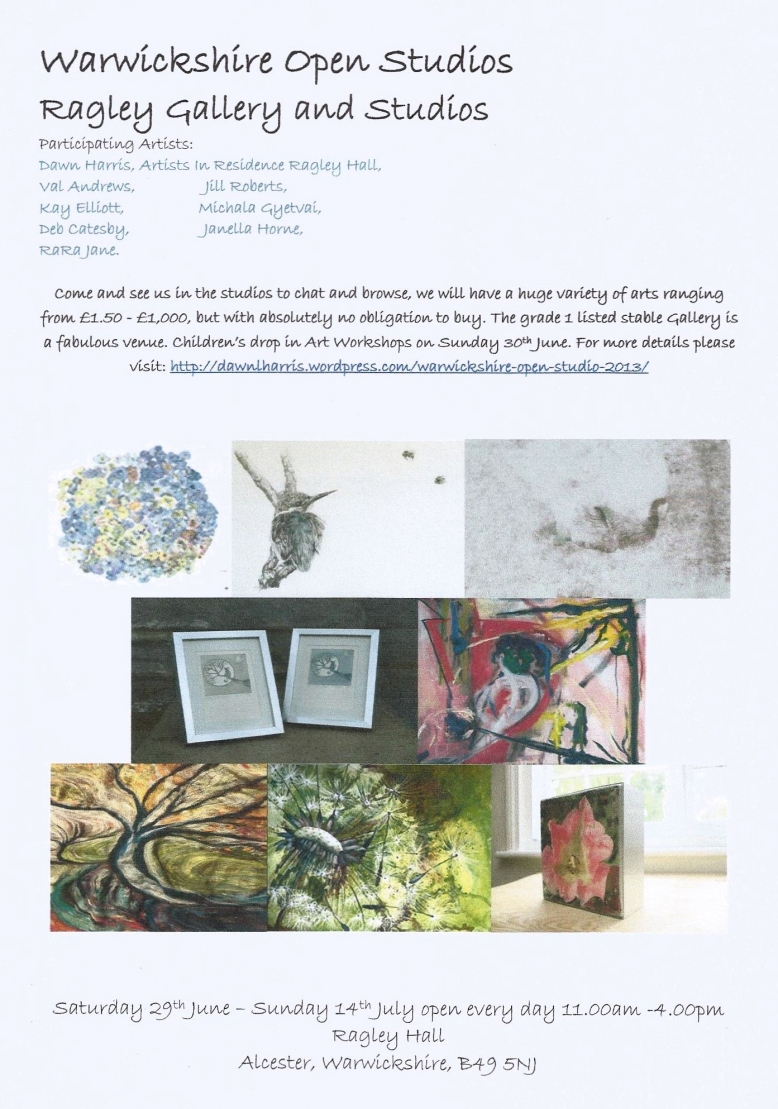 It has to be the most impressive Private View I’ve ever sipped a glass of wine at. But then I’ve never been to an art exhibition opening at a stately home before.

I drove through the large Capability Brown-designed parklands to park right in front of the very impressive portico of Ragley Hall. Inside, along with the other guests I enjoyed lovely nibbles, a glass of wine and a wander around some of the rooms of the Hall, which dates from 1680. The massive Great Hall, with baroque plasterwork by James Gibbs dating from 1750, has several other State Rooms leading off it, including one set for dinner for 24, a bedroom used by visiting royalty in the past and sitting rooms with old masters on the walls. From some of the windows the vistas stretch for miles across parkland, woods and a lake.

The Hall is owned and lived in by the ninth Marquess and Marchioness of Hertford and their family, who were there for the opening of a new on-site attraction.

For the summer, Dawn Harris is the artist in residence at Ragley, On select days between now and October she will be based in the Ragley Gallery & Studio within the Grade 1 listed stables and will use it for reflection and research to produce work that responds to the Ragley environment. The residency is entitled Negotiating Heritage, and Dawn will be considering why heritage is important to the community.

To celebrate the opening of the new gallery and studios, there’s an exhibition on until May 19 entitled Curating Curiosity, featuring work by Dawn and 12 other artists who she selected to be in the exhibition. The impressively-large stable block – complete with atmospheric horse braying in the background – has been partly converted into the studios, but the brick floor and all fittings including metal feeders remain. In the different bays instead of horses there’s work by different artists on the walls.

The artists range from the newly-graduated to the very established, with Coventry’s George Wagstaffe the best known. Dawn’s rationale for who she picked was simple: “I recently graduated from Worcester University and some of the artists were people who I

Perspective by Dawn Harris
knew from university and I know what their struggle is about and I knew them personally and their work, and what it’s like being an artist moving from education into the big wide world.

“The other artists, I had become aware of their art more recently. It’s essentially about how different artists approach the same subjects in different ways.”

Two of the artists and Dawn will be taking up residence in the studio area after the exhibition. Dawn added: “It’s about Negotiating Heritage and they will be looking at their practice in that way. The real hope is to build a really nice community of artists.”

The Curating Curiosity exhibition has a small number of works from all 12 artists. Upstairs there are two video pieces, one intriguing one of the Baghdad ballet by Stuart Layton, whose accompanying information is the most interesting of them all, and Karen Gazey’s work including a carpet projected onto the floor. Both are in competition with the amazing wooden framed building and exposed roof which are equally eye catching.

Downstairs the works include Carolyn Morris’s abstract paintings inspired by the Worcestershire countryside. Anne Bate-Williams is showing collages made up of architectural photographs which seem fitting in such an architecturally-impressive setting. Former writer Deborah Catesby is showing large, colourful oil paintings, and Brian Cook’s sculptures, inspired by classical architecture, stand in the middle of a stable block.

Tor Hildyard’s collagraph prints of heads and bodies show her interest in capturing the range of human and animal forms, and Zarina Keyani uses bright colours to capture stories about mythical beings.

Coventry-based George Wagstaffe’s sculptures dominate the largest room. Phoenix II is a large piece symbolising rebirth, tall and white but not perfectly preserved, with what appears to be an egg inside, bursting open and spilling its contents down the rest of the work.

The Gift is a colourful, dreamy painting of a girl and horse, in one of George’s favourite themes, and Crow is a sculpture influenced by the poetry of Ted Hughes, a beaky head twisted on top of a larger piece.

The exhibition is only on until May 19, so it’s a great opportunity for a day out to see an interesting collection of works in a lovely setting, or to find out when Dawn and her fellow artists are going to be in residence after that see the website at http://www.ragley.co.uk/days-out-in-warwickshire/heritage-culture-seekers then either art-exhibition or artist-in-residence.

The impressive stable block housing the gallery and studios 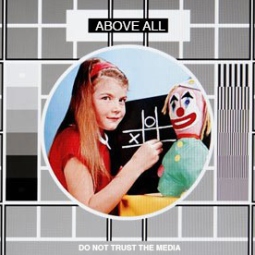 Stuart Layton, I Laugh Now, Tomorrows Not So Easy 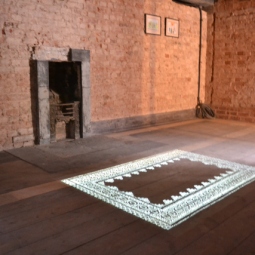 Deb Catesby, The Hug in the Halllll 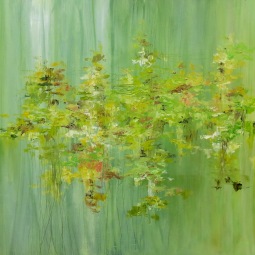 A screeching black bursts from a pool of throbbing blue, hurling me in every direction.
I land in a vast expanse of white that sucks me in and breathes me out; a form that engulfs my own; my breath is no longer my own.
I writhe, fold and struggle.
I push closer to that compelling green
Alluring and imaginary…

Extract from A Story of Painting by Becca Harris

To celebrate the opening of the new gallery and studios, there’s an exhibition on until May 19 entitled Curating Curiosity, featuring work by Ragley’s Artist in Residence Dawn Harris and 12 other artists selected to be in the exhibition through an Open Call.

For more information and about the artists and their works click: Curating Curosity